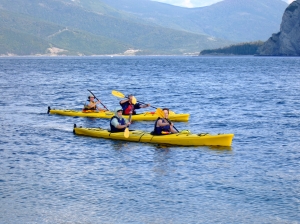 Ottawa–  In the run-up to Canada Parks Day on the 3rd Saturday in July, the Canadian Parks and Wilderness Society (CPAWS) released a sobering report  about the growing threats our parks are facing. The report highlights the dangers to our parks due to funding cuts; the loss of science and ecological monitoring capacity; and the growth of inappropriate developments within and adjacent to many current and proposed parks.

“In Newfoundland and Labrador, this discouraging trend is in strong evidence. We have lost valuable staff in both our national and provincial parks, and hours are currently being reduced” expressed Co-Executive Director Suzanne Dooley, CPAWS NL.

“Across the country, the trend is extremely discouraging this year. Parks Canada has been hit hard by funding cuts, leading to the elimination of 638 positions across the country. In turn this means that nearly 30% of the scientists and technicians restoring and monitoring the ecological health of our parks have been fired or reassigned.  The cuts also mean many parks are cutting their seasons shorter, opening the door to inappropriate use of them with no supervision,” says CPAWS National Executive Director Eric Hebert-Daly.

“Not only are our parks facing growing threats to their ecological health from the funding cuts, the tourism community and nearby communities are also facing economic harm.  The government’s own research shows that for every $1 spent on parks, $5 is contributed toCanada’s gross domestic product. Why isn’t the government recognizing the important benefits that result from investing in our parks?” adds Hebert-Daly.

“In Newfoundland and Labrador , we are very concerned cutbacks and layoffs to staff will have a huge impact on the ecological integrity of the parks as well as the effects that it will have for the visitor experience and local communities,” says Dooley.

CPAWS has been issuing an annual report on the state ofCanada’s parks since 2008. The first report lauded the rate of new parks creation by the federal government that year. Subsequent reports noted the slowdown in parks creation, the need to increase the number of marine protected areas, and some inappropriate developments that were starting to be noted.

CPAWS is Canada’s voice for wilderness. Since 1963 we’ve led in creating over two-thirds of Canada’s protected areas. That amounts to about half a million square kilometres – an area bigger than the entire Yukon Territory! Our vision is that Canada will protect at least half of our public land and water. As a national charity with 13 chapters, 55,000 supporters and hundreds of volunteers, CPAWS works collaboratively with governments, local communities, industry and indigenous peoples to protect our country’s amazing natural places.